It was Labor Day weekend, 1969, two weeks after Woodstock, and thousands of hippies and lovers of peace and music converged on the small town of Lewisville, just north of Dallas, at the Texas Pop Festival to be and to see and to hear the music of B.B.King, Canned Heat, Chicago, Delaney & Bonnie & Friends, Freddie King, Grand Funk Railroad, Herbie Mann, Incredible String Band, James Cotton Blues Band, Janis Joplin, Johnny Winter, Led Zeppelin, Nazz, The Quarry, Rotary Connection, Sam & Dave, Santana, Shiva's Headband, Sly & the Family Stone, Space Opera, Spirit, Sweetwater, Ten Years After and Tony Joe White. However, the festival was a festival of music, and that’s where the heart of our book must beat. The rock, jazz and R&B that was heard in the heat of a Texas Labor Day weekend in 1969 was some of the best that year had to offer. The soulful serenades of Sam and Dave, the jazz melodies of Herbie Mann and the blues riffs of B.B.’s Lucille meshed perfectly with rock legends like Led Zeppelin and Chicago. And Janis, bless her heart, was actually nervous about playing for a Texas crowd again. The sixties experienced a renaissance of music that has yet to be matched, and this was the decade’s finale. Some of us knew Dallas would never be the same as the shade of Lee Park, a major hippie hang-out was abandoned for the sun-drenched fields of the Dallas International Motor Speedway. The Turtle Creek Turtle (a cartoon icon for the Dallas hippie scene) could bask in private as the hippie masses were drawn by the idea of togetherness with thousands of their own kind. If the music was the heart of the festival, the people were the soul. The majority of the text in the book will be the actual words of the people who were there. The story of the Texas International Pop Festival must be told by those who made it what it was, the loving people who took part. That's why we're looking for anyone who was there. We don't just want clever anecdotes. If you were there, we want to hear from you. Don't worry that you don't remember much or that you don't have cool stories. You'll be able to add to our story, believe it or not. 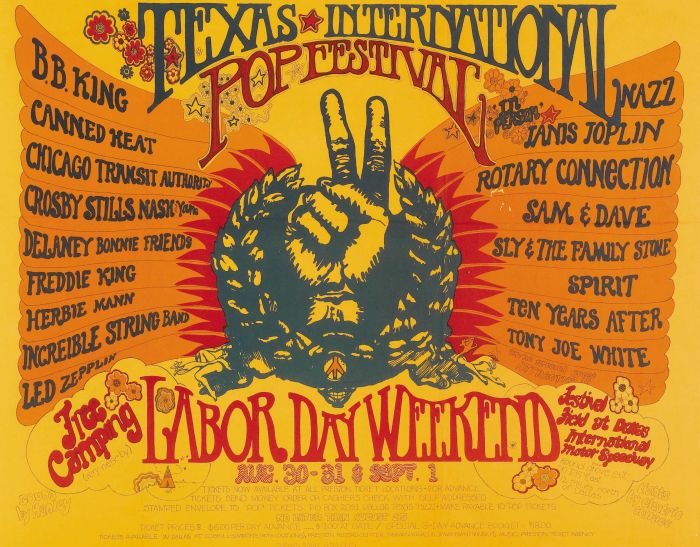