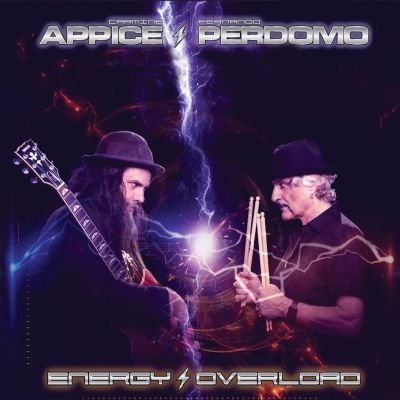 Drummer Carmine Appice is a legend of the New York rock scene going all the way back to when his band Vanilla Fudge were wowing the crowds as the house band back in Island Park on the South Shore of Long Island. Years of playing with some of the greatest musicians in rock history has only sharpened his legacy and lo and behold in 2021, Carmine is back recording a new album with modern-day guitar / producer wiz Fernando Perdomo. Perdomo is a relatively new name yet in the past five years, he’s managed to create such a wide range of great albums producing artists, as well as on his own, that it staggers the musical imagination. Recording with a drummer as illustrious as Carmine Appice, on Energy Overload—credited to the Carmine Appice & Fernando Perdomo Project—Fernando blows collective musical minds with a performance on electric guitar that rivals earlier albums Carmine recorded with notables including Jeff Beck. Instead, Fernando rises high to the task at hand and proves his valued worth as both a guitar hero as well as an album producer and a multi-instrumentalist. Not only does Fernando play all guitars yet he adds to the mix by performing bass, keys, Hammond organ and more. All music composed by Appice / Perdomo is offset by key covers, including a rocking version of Paul McCartney’s “Maybe I’m Amazed” and an up to date cover of Rod Stewart’s late '70s disco hit “Do Ya Think I’m Sexy”, which incidentally, no lie, was a co-write by Rod Stewart and Carmine. The entire 12-track Energy Overload CD rocks on so many levels that it’s basically an across-the-board goldmine of instro-rock-fusion magic.