Progressive rock outfit Gypsy began its existence as the Minneapolis-based pop band the Underbeats, formed in 1964 by guitarist James Johnson, bassist Doni Larson, and drummer Tom Green. With the subsequent addition of singer/guitarist Enrico Rosenbaum, the group regularly performed throughout the Twin Cities circuit, scoring a handful of local hits including "Footstompin'," "Annie Do the Dog" and "Book of Love." Keyboardist James "Owl" Walsh was recruited after Johnson was drafted for military service in 1969; upon his discharge, Johnson returned to the Underbeats lineup, and the quintet relocated to Los Angeles soon after, where they landed a gig as the house band at the famed Whiskey-a-Go-Go. Rechristened Gypsy, they began pursuing a heavier, more complex sound inspired by the rise of British progressive rock, though often compared to the music of Santana. After replacing Green with drummer Jay Epstein, the band signed to the Metromedia label, issuing their self-titled double-album debut in 1970 and earned considerable FM airplay with the tracks "Gypsy Queen" and "Dead and Gone." Larson and Epstein exited Gypsy prior to recording the follow-up, 1971's In the Garden, cut with bassist Willie Weeks - who later resurfaced in the Doobie Brothers - and drummer Bill Lordan. Randy Cates assumed bass duties for 1972's Antithesis, Gypsy's first album for new label RCA; however, upon releasing 1973's Unlock the Gates, the group dissolved, reforming just long enough to play the Super Jam '77 concert at St. Louis' Busch Stadium. A year later Walsh formed a new Gypsy lineup, issuing The James Walsh Gypsy Band on RCA to little notice; in 1996 - once again the sole original member - he assembled another Gypsy unit, releasing 20 Years Ago Today. While Lordan went on to play with Robin Trower, Rosenbaum died September 10, 1979 after a long battle with drug abuse; he was just 36 years old. 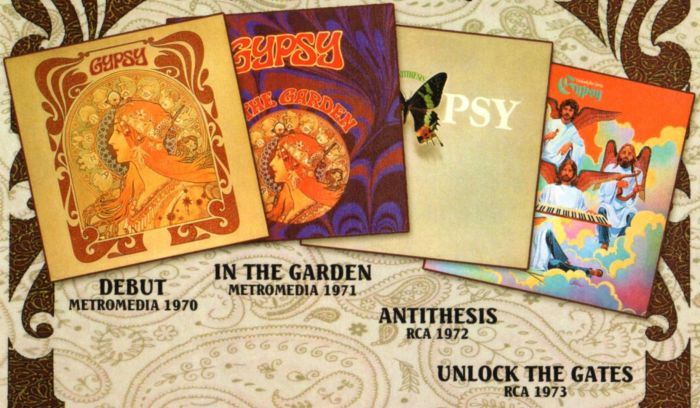 Their eponymous first album (70) was a double LP made up of jazz, prog rock and pop elements, featuring fantastic harmonies with vocalist/keyboardist James Walsh in the lead. The more polished "In the Garden", released a year later, is in the same vein with Walsh really cooking at the keyboards. With the release of "Antithesis" (72) and "Unlock the Gates" (73), however, the band took a downslide into bubble-gum pop. Sole member of the original line-up, Walsh gathered some musicians in 1996 and tried to revive the GYPSY sound with an album called "20 Years Ago Today"; an average-to-good album mostly made up of new compositions plus a couple of nicely reworked classics.