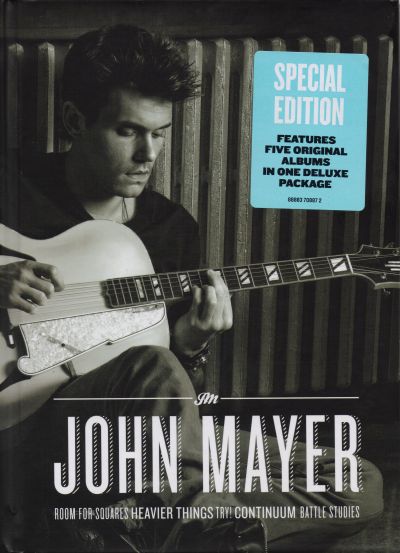 John Mayer is an American singer, songwriter, and guitarist. Born and raised in Fairfield County, Connecticut, Mayer attended Berklee College of Music in Boston, but left and moved to Atlanta in 1997 with Clay Cook. Together, they formed a short-lived two-man band called Lo-Fi Masters. After their split, Mayer continued to play local clubs, refining his skills and gaining a following. After his appearance at a 2001 South by Southwest Festival, he was signed to Aware Records, and eventually to Columbia Records, which released his first extended play Inside Wants Out. After making his introduction as a sensitive, acoustic-styled songwriter on 2001's Room for Squares, John Mayer steadily widened his approach over the subsequent years, encompassing everything from blues-rock to adult contemporary in the process. As adept a guitarist as a singer, Mayer gained widespread attention, spiking his songcraft with jazz chords and literate turns of phrase. The combination proved to be quite popular, as Room for Squares went triple-platinum before its follow-up release, Heavier Things, arrived in 2003 at the top of the Billboard 200. Accolades followed, including Grammys for hits like "Your Body Is a Wonderland" and "Daughters." He reached number two on the Billboard 200 with 2006's Continuum, an album that earned him further Grammy Awards for Best Pop Vocal Album and Best Male Pop Vocal Performance. Mayer continued to transform his sound with each album, moving beyond the material that had launched his career and adopting elements of rock, blues, and soul. Moreover, he partnered with legends of several genres, making guest appearances on albums by Buddy Guy, Eric Clapton, and B.B. King while touring with jazz icon Herbie Hancock. Mayer has retained enough of a pop/rock foundation to continue his reign of the charts, releasing more Top Five Billboard 200 albums, including 2009's Battle Studies, 2012's Born and Raised, and 2017's The Search for Everything; all of which has made him one of the era's most popular songwriters. In 2021, he further explored his love of classic '80s production aesthetics with Sob Rock.

Five CDs chronicle the incredible solo career of John Mayer, featuring music from the Blues, Rock and Acoustic eras of his career. The set features 4 of his legendary studio albums, each includes Bonus Tracks. Try, is Mayers Live Album, featuring performances with Steve Mayer and Pino Palladino. And a 78 page booklet with extensive Liner Notes and Photos. 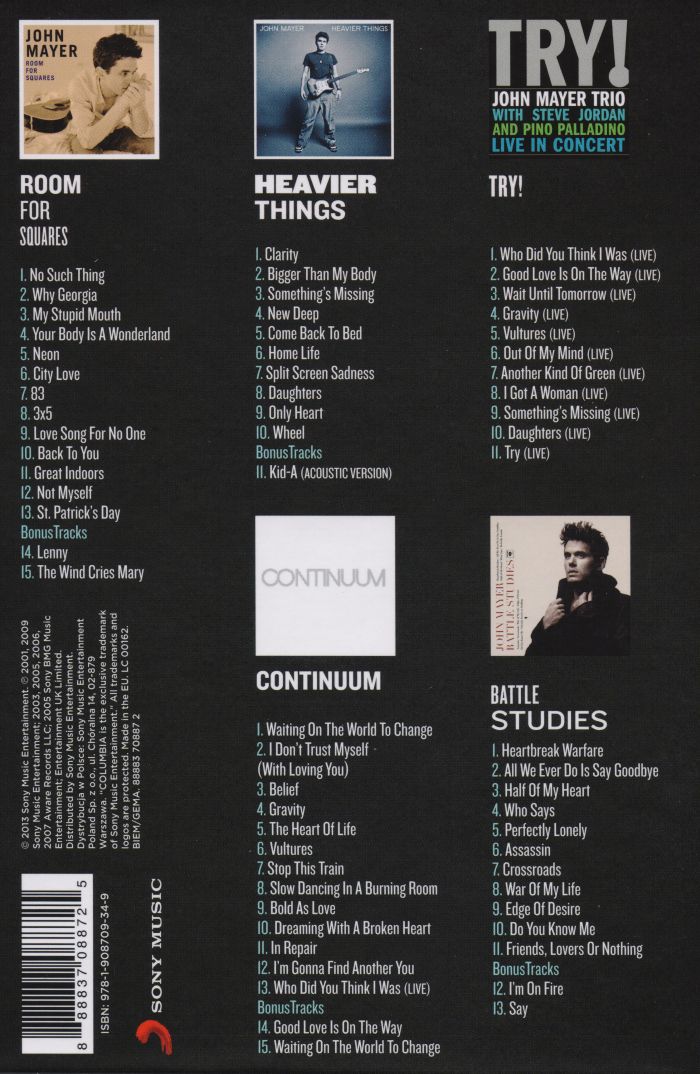