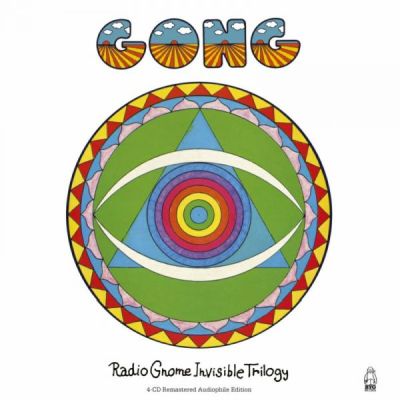 No one with well-functioning ears could ever accuse Daevid Allen and Gong of being besotted with the music of change but singularly lacking in tonal glamour. A precursor to most so-called “movements” in the UK before the advent of the likes of David Bowie and Talkin Heads Gong delivered on so many fronts; picking up on the heft of everything from the Blues and Jazz to the Beatles, the music of Gong delivered it all with swing and regal polish. This exquisitely re-mastered and repackaged anthology – both as 3-volume set of 180-gram LPs and a coffee-table-sized presentation of a 4-CD boxed-set (both audiophile editions) the Radio Gnome Invisible Trilogy from Charly Records (UK)is the epitomé of spit and polish of Gong. Musical textures, as always, are uncommonly rich, the bass-line full and lustrous, and the playing throughout is as wildly expressive as you could wish for, especially in the warmth of the audiophile edition LPs. Vocals are kept taut and on the move at all times, judiciously modulated tempos leap out at you burning with the fire of originality. Brass and woodwinds ring resplendent reaching an impressive full height soon after the opening bell, progressing spring-like as Gong perform their madcap gambol in the English sun.

The CD boxed-set comes with a “bonus” disc (naturally) featuring four original tracks and three other songs, but it’s no marketing gimmick; just a disc of wonderfully expressive Gong music that is essential listening for anyone interested in what happened in the 1960’s and 1970’s. Both sets are remarkably annotated – ‘remarkably’ because it’s probably unlikely that Gong kept organised notes, what with so much going on in a Gong Universe that is more offbeat than ‘commercial’. And yet the producers found enough in the Gong archives to make both packages something to die for. Daevid Allen, is, of course responsible for the magical illustrations and, of course, the glorious music that fills these sets from end to end with more than something he called “The D.D.T. Blues” and with “Perfect Mystery”. Listening afresh to Flying Teapot, Angels Egg and You one rediscovers the expressive madcap capers that emerge afresh in such consistently lyrical music as “The Pot Head Pixies” and “ZERO the HERO and the WiTCH’S Spell” from Flying TeapotAngel’s Egg. “Thoughts for Naught” and “A Sprinkling of Clouds” is music that gives me energy, emotion and everything else in You. I have to say that listening to the LPs feeds the impulse to fall on the side of vinyl-collecting. However, the CDs make terrific listening as well. And both packages are, after all, imbued with the unmistakeable nobility that was at the epicenter of Daevid Allen’s musical and visual art. 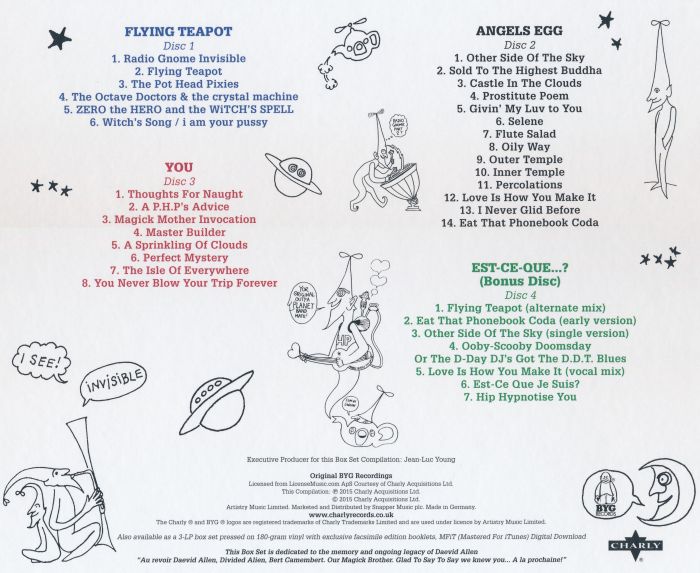