Formed in Liverpool, England, in 1973 by singer Dave Lloyd, guitarist Mick Devonport, bassist Keith Mulholland, and drummer John Mylett, hard rockers Nutz distinguished themselves as one of the decade's most undistinguished second-tier acts. None of their four albums for A&M -- 1974's Nutz, 1975's Nutz Too, 1976's Hard Nutz (introducing keyboard player Kenny Newton), or 1977's Nutz Live Cutz -- fared particularly well, and occasional support tours with Black Sabbath and Budgie (not to mention a Friday night slot at the 1976 Reading Festival) also failed to further their cause. By 1979 the band was sputtering to a halt, but when their song "Bootliggers" was surprisingly chosen for inclusion on 1980's Metal for Muthas (a compilation of emerging New Wave of British Heavy Metal talent like Iron Maiden, Praying Mantis, and Samson), Nutz decided to cash in on the younger generation by reinventing themselves as Rage. This barely disguised new version of Nutz (not to be confused with the German power metal trio that appeared a few years later) ejected their keyboard player, recruited additional guitarist Terry Steers, and went on to record three more albums before finally breaking up in 1984.

The first album by Nutz was an interesting and varied affair in which the band played with several different styles without losing their identity. Many of the songs use acoustic or progressive rock introductions to lead into blues-rock pieces, sometimes in very inventive ways. There are also some very successful progressive folk songs, a direction the band dropped after this album. It's a shame, as the catchy, carnival-like "Round and Round" suggested that this band could have done some fine things with the style. It's a track that bears repeated listening, the parade-ground drumming overlaid by acoustic and electric guitars and a simple but urgent vocal line. Here and throughout the album the vocal harmonies are impressive, more so than on any of their later works. Nutz got everything right on their first album, but somehow failed to build on this solid foundation. 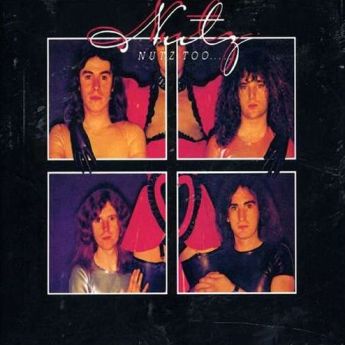 The second Nutz album was a bit more basic than the first, with more of a focus on blues-based hard rock and a slicker, more professional feel. Still, the band managed to keep things interesting with acoustic textures and some interesting time changes in the course of the album. The instrumentation bears comparisons to Led Zeppelin in spots, though vocalist Dave Lloyd's appealing bluesy rasp is from a whole different tradition than Robert Plant's. The rest of the band fills in with some effective harmonies, and there are moments when their hook-laden hard rock shows a sophistication that is above most of their peers. The weak spot is the songwriting, which is fairly throughout. The sole exception is "Dear Diary," a lovely little piece that shows that the band can give a delicate performance to more personal material. On the whole, Nutz Too is a pleasant listen, though not quite as memorable as the albums that came before or after.

The last studio album from Nutz shows some lyrical growth from their sophomore effort, and is also improved by the presence of keyboard player Kenny Newton. The band turns in their usual bluesy boogie rock with progressive elements, but with a bit more vigor and nuance than usual. There are some interesting transitions between songs and some genuinely inventive arrangements. Nutz never did have the consistency to be a major act, but Hard Nutz shows that they did have a good set of rock instincts, and if they only had had a first-rate songwriter, they could have gone far.