Fruupp were a 1970s progressive rock band, which originated in Belfast, Northern Ireland, but developed a fan base in Great Britain. They were relatively popular, particularly on the student scene and as a supporting act, opening for such bands as Genesis, Queen, and King Crimson.

Future Legends is the debut studio album by North Irish progressive rock band Fruupp. Recorded in July 1973 and produced by Denis Taylor, it was released on 5 October in the United Kingdom on the Dawn Records label, a subsidiary of Pye Records for underground and progressive rock music. To promote the album, the band undertook a two-month tour which finished on 29 November with a concert in The Whitla Hall, Belfast where they played with the Ulster Youth Orchestra. The track "On a Clear Day" written by Stephen Houston featured in the first hundred vinyl pressings of Future Legends but was later withdrawn from the album. It resurfaced as a bonus track in the 2009 Esoteric Recordings remastered edition.

Seven Secrets is the second studio album by North Irish progressive rock band Fruupp, released on 19 April 1974 in the United Kingdom on the Dawn Records label, a subsidiary of Pye Records for underground and progressive rock music. Like the band's debut album, it was recorded at Escape Studios in Egerton, Kent, but was this time produced by David Lewis, the frontman of another North Irish rock band Andwella. Before Fruupp entered the recording studio, they had written six songs, but felt that the album's name "Seven Secrets" would be much appropriate than "Six Secrets", so Vincent McCusker composed an acoustic guitar and spoken song "The Seventh Secret" to ensure the album had seven tracks to match its new title. 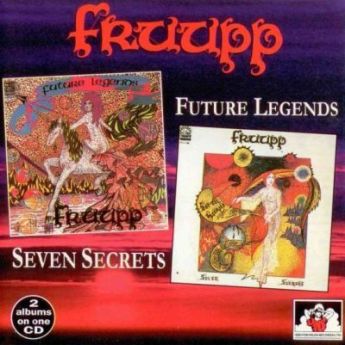 The Prince of Heaven's Eyes is the third studio album by North Irish progressive rock band Fruupp, released on 8 November 1974 in the United Kingdom on the Pye label's underground and progressive music imprint Dawn Records. Recorded from August to September 1974 at Morgan Studios in London, it was the only album produced by Fruupp themselves. The band supported the recording with a two-month tour which commenced on 24 October with a highly successful concert in The Ulster Hall in Belfast. In January 1975, Stephen Houston left the band to become a Christian clergyman, and was replaced by John Mason, with whom Fruupp recorded their last album to date, Modern Masquerades (1975). The Prince of Heaven's Eyes was the group's debut LP which had been promoted by 7" singles. The first single was "The Prince of Darkness" backed with "Annie Austere", released on 11 October 1974. During the recording sessions, Fruupp composed a song called "Prince of Heaven" credited for the first and only time the whole band. It is about the album concept as opposed to being part of it, and for that reason was not included on the album and was released as the second single with "The Jaunting Car" as a B-side. It was issued as a promo on 4 October 1974 and became available at retail on 18 October. Most subsequent reissues of The Prince of Heaven's Eyes on CD featured "Prince of Heaven" as a bonus track.

Modern Masquerades is the fourth and final studio album by North Irish progressive rock band Fruupp, released on 14 November 1975 in the United Kingdom on the Pye label's underground and progressive music imprint Dawn Records. Recorded from August to September 1975 at Basing Street Studios in London, it was produced by multi-instrumental musician Ian McDonald, best known as a founding member of King Crimson and Foreigner. In addition to the production role, McDonald also played alto saxophone and percussion. Modern Masquerades proved to be the only Fruupp's recording without founding keyboardist Stephen Houston who had been replaced by John Mason in early 1975. The supporting tour commenced in Hastings on 5 December 1975 and finished in Manchester on 2 February 1976.