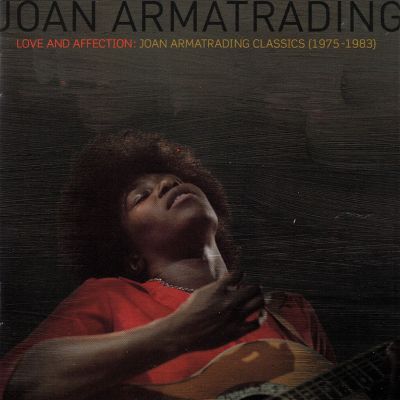 This is the way a Joan Armatrading best-of collection should be assembled in the first place. The numerous single-disc compilations never came close to being representative of her achievement as a recording artist. Culling 43 tracks over eight years and 11 albums is even better in many ways than issuing an Armatrading box set. All of the expected material from the early years is included on disc one, such as "Cool Blue Stole My Heart," "Travel So Far," "Dry Land," "Down to Zero," "Love and Affection," "Help Yourself," "Woncha Come on Home," "Show Some Emotion," "Willow," "Barefoot and Pregnant," "Bottom to the Top," "You Rope You Tie Me," "Your Letter," and many more, including "The Flight of the Wild Geese" from the soundtrack to the film. It covers Armatrading's prolific period from 1975-1979, where a lot of old hippies, now upwardly mobile professionals seeking mellow escapes from their relentless and often ruthless pursuit of "the good life," got off the bus and remained stuck, listening only to her early records along with those of the Jacksons, Eagles, and James Taylor. The only problem with this is that Armatrading was just beginning to gain a confidence that led her to become really adventurous, taking huge chances with both her songwriting and production styles in the 1980s. She became a pop singer whose lyrics were anything but pop and whose music expanded the boundaries of pop to include reggae, jazz, and slippery folk music. Admittedly, the results were sometimes erratic, but were never, never less than utterly compelling. Disc two features all four tracks from the excellent How Cruel EP, including the reggae soul-drenched bluster of "Rosie," the title track, and "He Wants Her," with its dubbed-out drums and snaky guitar slinking through her sensual vocal. Eight cuts from the Me Myself I album represent the vast majority of it; it also marked Armatrading's first true rock & roll outing. She had heard the late-'70s music from England and Jamaica - as well as the Lower East Side of New York - and was affected by it. She didn't try to make punk rock or new wave music, but she let its freedom enter her songwriting consciousness and open it up. As she hung out with producers like Richard Gotteher (Robert Gordon, Mink DeVille, and Lou Reed) and Henry Lewy, rock and roll became Armatrading's chosen vehicle of expression.

By the time she made her bravest recordings, Walk Under Ladders in 1981, The Key in 1983, and Track Record with Steve Lillywhite (U2, Ultravox, Psychedelic Furs, etc.) in 1983, the English audiences went crazy while the Americanskis walked away almost entirely. Armatrading's songs had turned dark and grew tenser with the times, dealing with themes of emotional and physical abuse, vulnerability that is not necessarily willful, but is welcomed in a first-person way. They made folks who wore designer clothes, drove BMWs, and spouted "liberal" causes feel queasy - one listen to "The Weakness in Me," "I Really Must Be Going," or the infamous " (I Love It When You) Call Me Names" made the yuppies flee in droves. The final two tracks, "Frustration" and "Heaven," are awesome. The former is post-rock and downright right funky with its collapsible backbeat. She took South African township jive, mixed it with greasy fretless basslines and celebratory melodic schematics, and juxtaposed it against tough lyrics of street life and cultural suffocation. "Heaven" is, in a sense, a small nod back to where Armatrading had come from, asking a wider and darker series of the questions she was asking on her earlier records, but its twists and turns make it as much a spiritual love song as a secular one. For Armatrading, need, love, obsession, sensuality, and excess had all become inseparable from one another in her songwriting; along with the pumped-up rock aesthetic, it made her music downright dangerous. She dared to proclaim her darkness without regretful confession or repentance. She dared to make anthems out of raw need and insecurity, and made the tension between lovers something truly sensual. As an artist, Armatrading never sought to find innocence; her vision as an artist has always been expansive, and she took on race and class issues in her songs via amorous relationships, daring both parties to step out of their fear. These songs tell stories so intimate and so encompassing it's no wonder most that people don't get them; they can't even imagine what addressing that fear would be like, let alone have somebody do it in wondrous pop songs you can hum to. Necessary, explosive, and brilliant, listen and behold the songs of a sage whose wisdom is from the school of hard knocks and transcendent courage, and whose musical sophistication is second to none. This is the only Joan Armatrading collection worth owning. 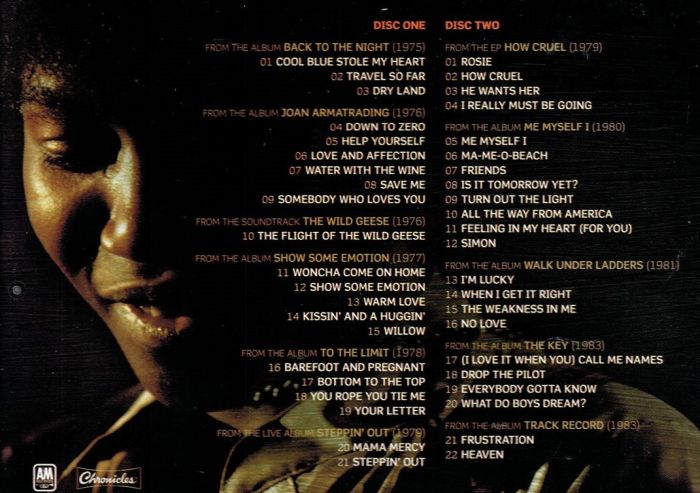