Robin Trower may seem a modest and quiet man, but his achievements are great. Over the decades since he formed his own band back in 1973, he has conceived many fine solo albums that showcase his exceptional talents as a guitarist, singer and composer. Here’s a truly outstanding new collection of some of the finest recordings by one of rock’s most admired guitar heroes. This double CD set comprises 35 tracks gathered from a range of original recordings released between 1987-2013, now all together for the first time on one album. Our compilation runs from his first studio album after leaving Chrysalis Records, 1987’s ‘Passion’, to the latest highly regarded ‘Roots And Branches’, an album of covers and retro-inspired originals that pays homage to Trower’s blues roots. The track listing is the most comprehensive yet offered by any label. It was selected in collaboration with Robin himself to perfectly represent the second half of his stellar career, that still continues both ‘live’ and on record. Like all the great bluesmen, Trower gets better with age! Some tracks included here are hard or impossible to find, due to label changes in Robin’s latter career. The 35 tracks represented give a fully detailed picture of his development as a guitarist and musician over the past 26 years. And there’s more to come… A very high standard of musicianship is maintained throughout and, above it all, soars Trower’s magically emotive guitar playing that has remained on top form for more than 5 decades. Booklet with authoritative and extensive liner notes written by respected author and journalist Michael Heatley (‘Record Collector’ and ‘Guitar & Bass’). It includes quotes from four separate interviews he has conducted over the past decade with Robin Trower. Expertly remastered. Superb sound - top quality reproduction. The best in the business! 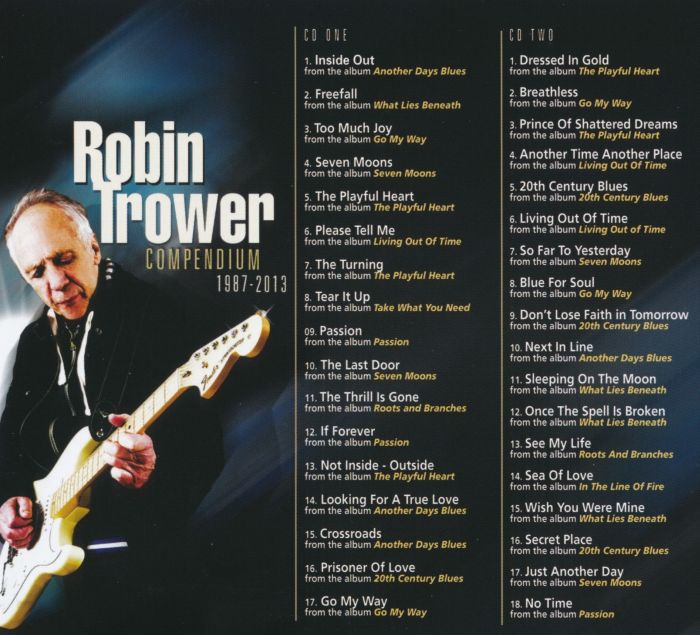