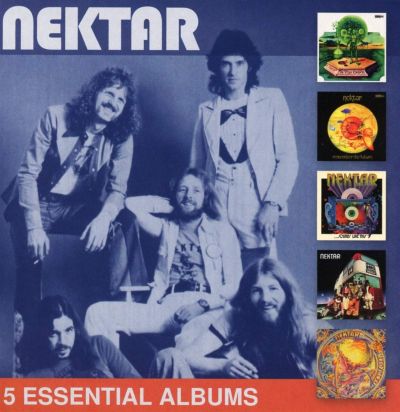 Nektar, formed in Germany by four Englishmen, never stormed the charts during prog-rock's brief early-'70s heyday, but they created their own distinctive sounds with early work that conjured images of floating through outer space, including chunky guitar chords, doom-laden organ, and phased vocals sesting a cold and lonely trip through vast cosmos (a parallel but harder-rocking universe to Saucerful of Secrets-era Pink Floyd). There was also a change in direction during the mid-'70s, featuring crisper production as well as pop lyrics and choruses, deemphasizing the abstract, spacy elements that initially made Nektar's music distinctive. At its peak, the quartet was capable of powerful music that ranks among the best progressive rock, and for a little while in the early to mid-'70s, it seemed like they might take the American rock world by storm. They continued recording until the early '80s, reformed in the 21st century to record further and appear at various progressive music festivals. The roots of Nektar lie with a group of Englishmen -- Allan Freeman (keyboards, vocals), Roye Albrighton (guitar, vocals), Derek Moore (bass, Mellotron, vocals), and Ron Howden (drums) -- who all came to Hamburg from England in 1965 as members of different bands. They met in 1968 at the Star Club, where they discovered some common ground in the Beatles as well as early rock & roll but were drawn to the more experimental sounds just beginning to emerge on the rock scene. A year later they formed Nektar and began working at combining these influences into an effective whole. By 1970, with a light show (designed and operated by unofficial fifth member Mick Brockett) added to their stage act, they began attracting a growing following in Germany. They were signed to the Bellaphon label in 1971 and released their debut album, Journey to the Centre of the Eye. Their second album, A Tab in the Ocean, arrived in 1972, and achieved a cult following as a direct import. Their extended songs, usually involving extensive variations on the same theme, found a growing audience in an era dominated by the sounds of Emerson, Lake & Palmer and Yes. Nektar's sound, built around guitar, electronic keyboards, and bass, was far more gothic, with dense textures that didn't always reproduce well on-stage -- but the fans didn't seem to notice. On radio, however, their music filled in large patches of time and attracted listeners ready to graduate from Iron Butterfly and Vanilla Fudge, seeking a re-creation of the drug experience in progressive rock.

Their third album, Remember the Future, released in Germany in 1973, was the group's breakthrough. The title track, broken into two side-length halves, took up the entire record, and became a favorite of FM radio in 1974. It was followed later in 1973 by Sounds Like This, which was made up of shorter, simpler songs, but it was eclipsed in the United States by the American release of Remember the Future on the Passport label, their first U.S. release. When the group made their New York debut at the Academy of Music on September 28, 1974, Remember the Future was still the only Nektar album officially available in the United States. An indication of their stage presence and the nature of their act can be gleaned from the fact that between the wattage of their instruments and their light show, they blew the power at the Academy of Music upon taking the stage. Their next album, Down to Earth (1974), featured ten support musicians and singers, among them P.P. (Pat) Arnold, but it didn't attract nearly the radio play of Remember the Future. Their next album, Live at the Roundhouse (1974), was cut live at the London venue, and didn't include "Remember the Future" among its tracks. They maintained a devoted and significant cult following in America as well as Germany, and their German label later released two double-live albums from concerts in New York (which, between them, included two versions of "Remember the Future, Pt. 1" and two versions of "Pt. 2"). Ironically, Passport Records never released either album in the United States. Albrighton was gone by the time of Magic Is a Child (which featured one of the worst title puns ever in "Eerie Lackawanna"), replaced on guitar by Dave Nelson and synthesizer virtuoso Larry Fast joined the lineup for this album. The release of a double-LP best-of anthology in 1978 heralded the end of the group's run of success during the decade, although Man in the Moon, with David Prater on drums, was issued in 1980. However, the band re-formed in 2002 and began releasing new albums and appearing at progressive rock festivals such as that year’s NEARfest in Trenton, New Jersey. Original members Albrighton and Howden were featured in the group’s lineup, along with bassist Randy Dembo and organist Tom Hughes, although both Dembo and Hughes departed Nektar in 2006, and have since been replaced by Peter Pichl on bass and Klaus Henatsch on keyboards. During the 2000s, Nektar’s albums have included The Prodigal Son (2001), Evolution (2004), and Book of Days (2007). The live album Fortyfied was issued in 2009. Various studio and live albums filled the next decade, including 2013's Time Machine, 2018's Megalomania, and 2020's The Other Side. 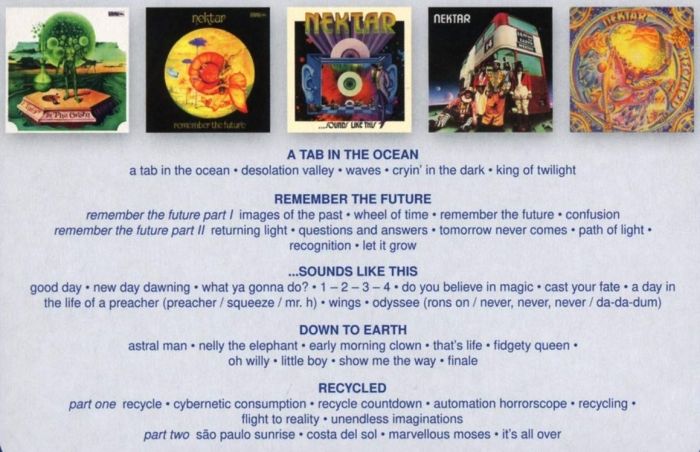