Bob Dylan is the debut studio album by American singer-songwriter Bob Dylan, released on March 19, 1962 by Columbia Records. The album was produced by Columbia's legendary talent scout John H. Hammond, who had earlier signed Dylan to the label, a decision which was at the time controversial. The album primarily features folk standards, but also includes two original compositions, "Talkin' New York" and "Song to Woody". The latter was an ode to Woody Guthrie, a major influence in Dylan's early career. The album did not initially receive much attention, but it achieved some popularity following the growth of Dylan's career, charting in the UK three years after its release, reaching #13. 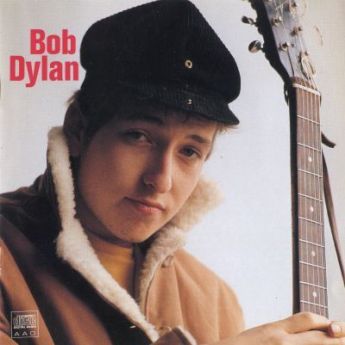 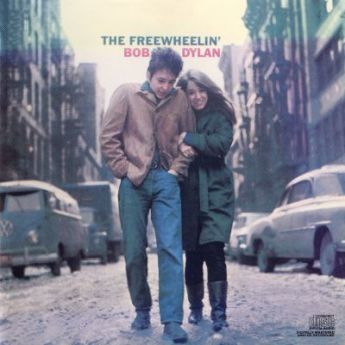 The Freewheelin' Bob Dylan is the second studio album by American singer-songwriter Bob Dylan, released on May 27, 1963 by Columbia Records. Whereas his self-titled debut album Bob Dylan had contained only two original songs, this album represented the beginning of Dylan's writing contemporary words to traditional melodies. Eleven of the thirteen songs on the album are Dylan's original compositions. It opens with "Blowin' in the Wind", which became an anthem of the 1960s, and an international hit for folk trio Peter, Paul and Mary soon after the release of the album. The album featured several other songs which came to be regarded as among Dylan's best compositions and classics of the 1960s folk scene: "Girl from the North Country", "Masters of War", "A Hard Rain's a-Gonna Fall" and "Don't Think Twice, It's All Right". Dylan's lyrics embraced news stories drawn from headlines about the Civil Rights Movement and he articulated anxieties about the fear of nuclear warfare. Balancing this political material were love songs, sometimes bitter and accusatory, and material that features surreal humor. Freewheelin' showcased Dylan's songwriting talent for the first time, propelling him to national and international fame. The success of the album and Dylan's subsequent recognition led to his being named as "Spokesman of a Generation", a label Dylan repudiated. The Freewheelin' Bob Dylan reached number 22 in the US (eventually going platinum), and became a number-one album in the UK in 1965. In 2003, the album was ranked number 97 on Rolling Stone's list of the 500 greatest albums of all time.

The Times They Are a-Changin' is the third studio album by American singer-songwriter Bob Dylan, released on January 13, 1964 by Columbia Records. Whereas his previous albums Bob Dylan and The Freewheelin' Bob Dylan consisted of original material among cover songs, Dylan's third album was the first to feature only original compositions. The album consists mostly of stark, sparsely arranged ballads concerning issues such as racism, poverty, and social change. The title track is one of Dylan's most famous; many feel that it captures the spirit of social and political upheaval that characterized the 1960s. Some critics and fans were not quite as taken with the album as a whole, relative to his previous work, for its lack of humor or musical diversity. Still, The Times They Are a-Changin' peaked at No. 20 on the US chart, eventually going gold, and belatedly reaching No. 4 in the UK in 1965. 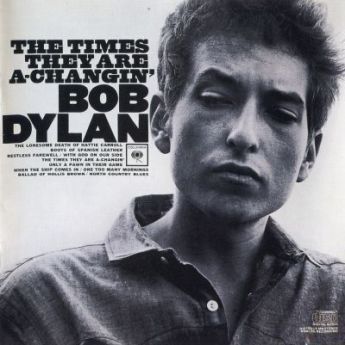 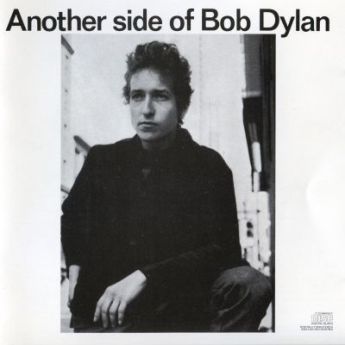 Another Side of Bob Dylan is the fourth studio album by American singer and songwriter Bob Dylan, released on August 8, 1964, by Columbia Records. The album deviates from the more socially conscious style which Dylan had developed with his previous LP, The Times They Are A-Changin'. The change prompted criticism from some influential figures in the folk community – Sing Out! editor Irwin Silber complained that Dylan had "somehow lost touch with people" and was caught up in "the paraphernalia of fame". Despite the album's thematic shift, Dylan performed the entirety of Another Side of Bob Dylan as he had previous records – solo. In addition to his usual acoustic guitar and harmonica, Dylan provides piano on one selection, "Black Crow Blues". Another Side of Bob Dylan reached No. 43 in the US (although it eventually went gold), and peaked at No. 8 on the UK charts in 1965.