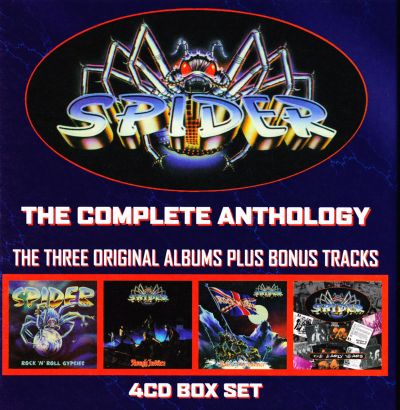 This British boogie group was formed on Merseyside in 1976 by the Burrows brothers. The band comprised bassist/vocalist Brian Burrows, drummer Rob E. Burrows and guitarists Sniffa and Col Harkness. After incessant gigging around the north-west, they relocated to London and were eventually signed by RCA Records in 1983. They debuted with Rock 'N' Roll Gypsies, a fuel-injected collection of boogie-based rockers, identical in almost every respect to the style of Status Quo. From then on, they were regarded as a poor-man's Quo. The album sold miserably and RCA dropped them. Picked up by A&M Records, they released Rough Justice, a semi-concept affair concerning a courtroom trial. Spider were the defendants, being accused of playing heavy metal rock 'n' roll. Another flop, it left the band without a label once more. Undaunted they plodded on, with Stu Harwood replacing Sniffa on guitar in 1986. Moving to the Mausoleum label, they produced Raise The Banner the same year. Musically they had not progressed, and the market for low-tech, three-chord boogie proved an ever contracting one. Outdated, and out of luck, they broke up shortly after the album was released. Brian Burrows is now a cartoonist and record sleeve designer.

Early 80s boogie metal band produced some fine (some might say clichéd) tracks that really are well enjoyable and worth checking out. After a number of reissues and compilations of varied quality we now get the complete works. 4 CDs, all in quality card sleeves, in a box with a thick booklet, with photos and Dave Ling penned sleevenotes. The band’s debut Rock’n’Roll Gypsies kicks off with AWOL and also features the blistering Talkin’ ‘Bout Rock’n’Roll and the slightly chunkier Part Of The Legend. There’s also the more than decent Rock’n’Roll Will Forever Last. The album featured a couple of singles and the band toured the Gillan at the time. The boogie owes much to Status Quo, and there’s plenty of twin guitar shred and vocal harmonies. A little rough’n’ready but it’s full on heavy metal rock’n’roll. Second albumm Rough Justice is a little more polished, and a tad more varied too. Opener Death Row is solid, and The Minstrel has it’s gentler moments but features a keyboard and some quality guitar work. There’s still plenty of boogie, especially in the heads down You Make Me Offers I Can’t Refuse and Here We Go Rock’n’Roll. The blistering solos over the boogie do work well. The band’s final album was not given much of an official release at the time (1986) as the record company went into liquidation on the day of release. It’s a good album but the weakest of the three, it sounds very mid 80s, it’s not dated so well, but it’s good, and good to get an official release. All three albums come with bonus tracks (singles et al), and the fourth disc is entitled The Early Years, rounding up pre debut album singles and the like. 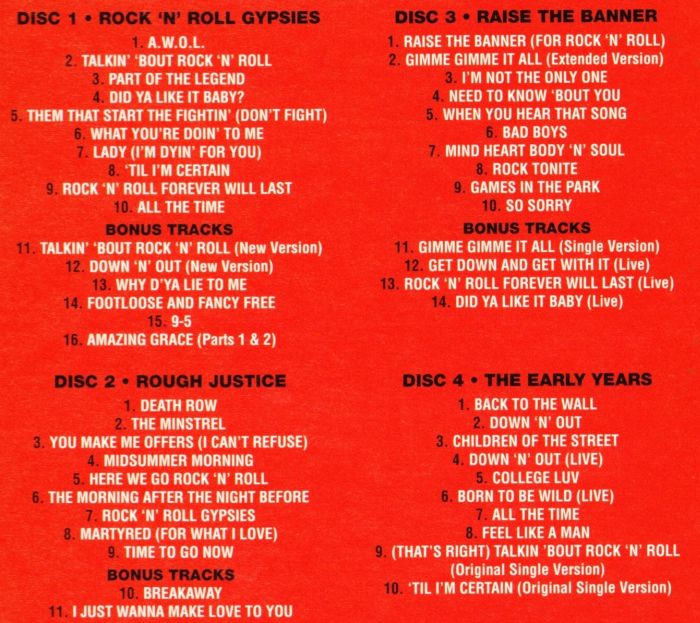