The Dawn Album Collection (2017): UK five CD box that rounds up all of Mungo Jerry's recordings for the Dawn label between 1970-74. Disc one is the debut Mungo Jerry album which hit #13 in the UK and #14 in Germany. Now comes with four bonus cuts including the rare Italian only 45 'Santo Antonio Santo Francisco'. The second CD contains the Electronically Tested album which hit #14 in the UK charts back in 1970 and includes the world-wide #1 'In The Summertime' which sold over 30 million singles. Also included is the UK #1 'Baby Jump' (Germany #11) whilst the #5 hit 'Lady Rose' is amongst the bonus tracks, as is the previously non-CD USA version of 'Have A Whiff On Me'. The UK #13 hit single 'You Don't Have To Be In The Army' is the lead track on the band's third album which now comes with four bonus tracks including three rare album session out-takes. Disc four is the legendary Boot Power album. The single versions of '46 And On' and 'Open Up' (UK #21, Germany #28) have been added as a bonus. The fifth disc is the Long Legged Woman album which was more a collection of non-LP singles and B-sides than a proper album. Includes the UK hits 'Long Legged Woman Dressed In Black' (#13) and 'Alright Alright Alright' (UK #3, Germany #12) as well as the German hit single 'Wild Love'. The booklet contains liner notes by Alan Clayson plus stacks of picture sleeves from around the globe to get the collectors updating their "wants" lists! 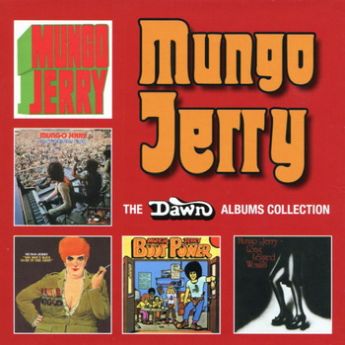 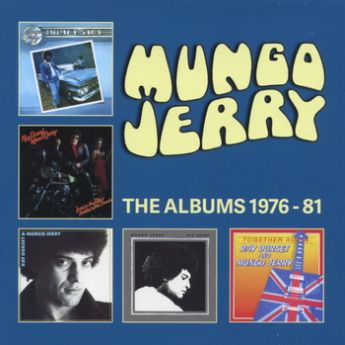 The Albums 1976-1981 (2018): UK five CD clam shell box set that concentrates on the years 1976-1981 in the long lasting and highly successful career of Mungo Jerry. Disc One features the Impala Saga album from 1976, now with six bonus cuts. Features the singles 'Hello Nadine' and 'Don't Let Go' plus two rare demos. The second disc is 1977's Lovin' In The Alleys Fightin' In The Streets LP, making it's debut on CD. Now with five bonus cuts and featuring the singles 'Sur Le Pont D'Avignon', 'All That A Woman Should Be' and 'Heavy Foot Stomp'. The self-titled Ray Dorset & Mungo Jerry from 1978 can be found on Disc Three, again making it's debut on CD. Two previously unreleased demos have been added to an album that features the singles 'Hello It's You Again', 'We're O. K. ' and 'Sugar Mama'. Disc Four is the Six A Side compilation from 1980 which at the time collected a whole batch of non LP singles and B-sides and put them on an album. Seven bonus tracks have been added including rare solo 45's by vocalist Ray Dorset. The final disc is 1981's mainland Europe only Together Again album. This featured the singles 'Stay With Me' and 'Rockin' On The Road' and has now been joined by six rare bonus cuts. The detailed booklet contains line notes by noted Rock historian Alan Clayson and is illustrated with numerous picture sleeves from across Europe of all the singles and albums from the time. 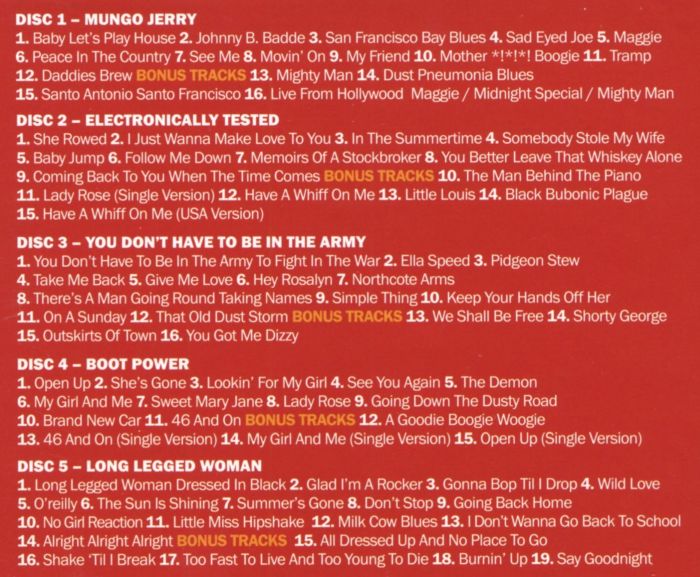 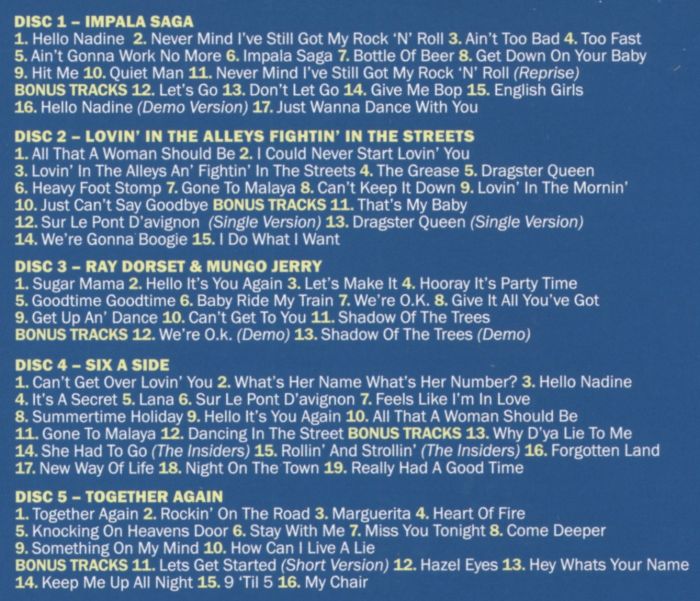