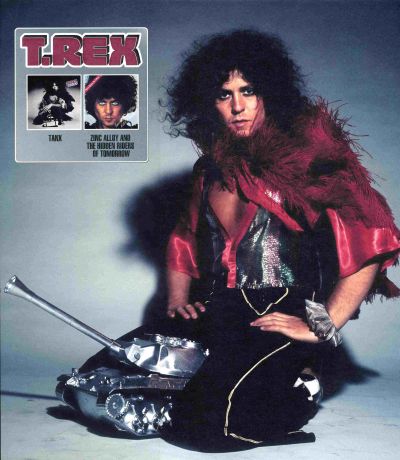 While many stateside listeners never got much deeper into T. Rex and Marc Bolan's massive catalog than the boogie glam fun of "Bang a Gong (Get It On)," Bolan spent much of his life as an ever-morphing pop star in his U.K. home, recording hits and even living on as a television personality until his death in 1977. This massive repackaging of Tanx/Zinc Alloy inspects a two-year period in Bolan's glam rock phase, which could be looked upon as transitional, moving away from the woozy, sexy hard rock of Electric Warrior and The Slider into far more soul-inflected pop fare. When Tanx and Zinc Alloy appeared in 1973 and 1974, respectively, they were initially seen as commercially disappointing, with depleted sales and far less in the way of hits than their predecessors. The expanded instrumentation and production trickery of the albums would age better than it seemed, however, and songs from this time seemed to point at an embrace of soul backup singers, string arrangements, and other slick pop elements that Bowie would enjoy massive success with a few years later on his Young Americans album. Tanx/Zinc Alloy in this Deluxe Edition presentation includes both albums and singles from their respective periods remastered in full by original producer Tony Visconti (with assistance from Ted Jensen) as well as track after track of demos, outtakes, alternate versions, and other scraps from the cutting-room floor. All told, the collection includes more than 80 tracks from this particular period of Bolan's oeuvre. Though less celebrated than his best-loved hits, the highlights here are among some of his best-written songs, and the production choices he was making on these records were far more interesting than the straightforward rock of his first few T. Rex albums, despite their superior overall quality. This set is a must for any completist and will reveal much to anyone interested in Bolan's curious, inspired paths of development. 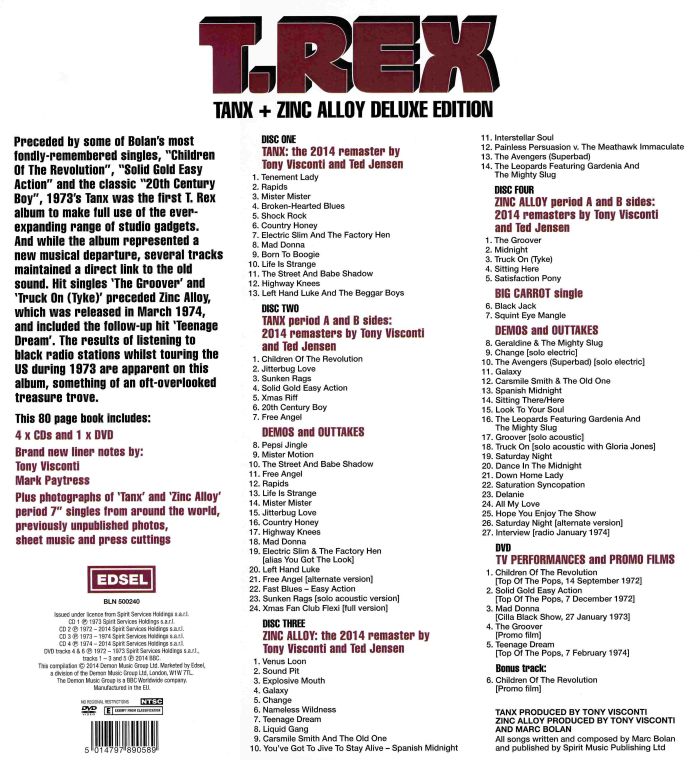