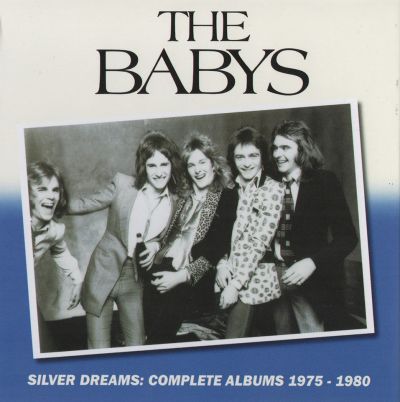 The Babys are probably better known for what their various members achieved later in their careers; singer John Waite’s massive solo success with the single ‘Missing You’ in 1984, and keyboard player Jonathan Cain, who would go on to be a principal member and song writer with Journey. In fact you’d be forgiven for thinking that The Babys were an American band, such was their impact on the US during the latter half of the 1970s and into the early 1980s, but their origins go back to London in 1974, when keyboard player Mike Corby met Adrian Millar, who were joined by Wally Stocker on lead guitar, Tony Brock on drums, and singer/ bass guitarist John Waite. Although an album was recorded and shelved in 1975, included here on CD6 as “The Official Unofficial BABYS Album”, for the debut album proper they signed to Chrysalis Records in 1976 to release their eponymous debut, “The Babys”. Co-produced by Bob Ezrin, “The Babys” set their stall out from the beginning as melodic rockers, propelled by John Waite’s bluesy, soulful vocals. Bonus tracks are ‘If You’ve Got The Time’ (Alternative Mix), ‘Head Above The Waves’ (B-Side) and ‘If You’ve Got The Time’ (mono). Released within a year, 1977’s “Broken Heart” featured the hit singles ‘Isn’t It Time’ (US #13 & UK #45) and ‘Silver Dreams’. This time the album was produced by Ron Nevison, famed for his work for The Who, Led Zeppelin, Thin Lizzy and Bad Company, as well as Chrysalis label mates UFO. Bonus tracks are ‘Money (That’s What I Want)’, ‘Silver Dreams (mono)’, plus single edit and mono versions of ‘Isn’t It Time’. Sticking with Ron Nevison for 1978’s “Head First”, The Babys had trimmed down to a three-piece of John Waite, Wally Stocker and Tony Brock. Peaking at #22, “Head First” was their highest charting US album, and features the singles ‘Every Time I Think Of You’ (US #13) plus the title track, ‘Head First’. Produced by Keith Olsen, famed for his platinum work with the Rick Springfield, Pat Benatar, Heart, Whitesnake, Foreigner and REO Speedwagon, by 1980’s “Union Jacks” The Babys had been joined by Jonathan Cain on keyboards and Ricky Phillips on bass. Featuring the singles ‘Midnight Rendezvous’ and ‘Back On My Feet Again’, mono versions of these tracks are also included as bonus tracks. Sticking with producer Keith Olsen, and maintaining the same line-up as “Union Jacks”, their fifth and final album in as many years was 1980’s “On The Edge”. Featuring mono versions of ‘Turn And Walk Away’ and ‘Postcard’, The Babys split shortly after the album’s release.

“Silver Dreams: The Complete Albums 1975-1980” is a fitting and thorough testament to a band that truly deserved to crossover into mainstream success. As a bonus, this collection’s 6th disc kicks off with the live, promo only “Live At The Tower Theatre, Philadelphia” from a 1977 concert whilst promoting their debut record. To complete the picture we go back to their very first recordings, with the aforementioned “The Official Unofficial BABYS Album”. 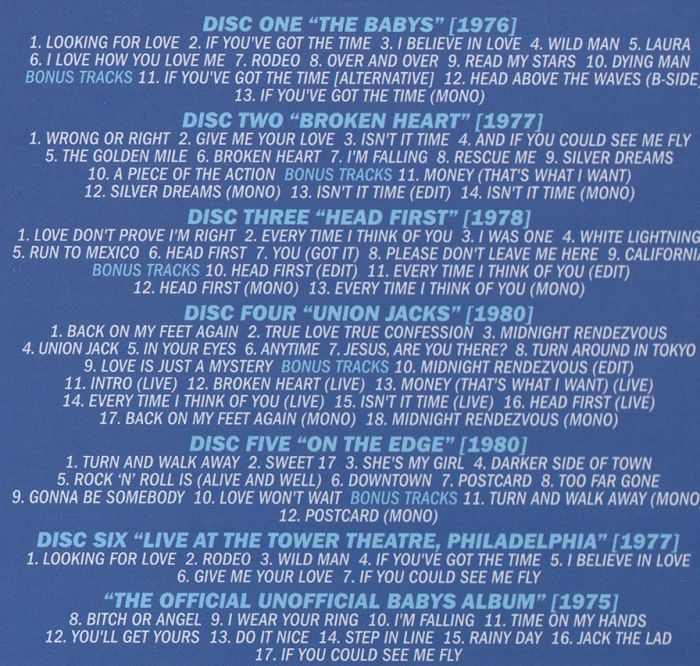