Michael Ronson (1946 – 1993) was an English guitarist, songwriter, multi-instrumentalist, arranger, and producer. He achieved critical and commercial success working with David Bowie as one of the Spiders from Mars. He was a session musician who recorded five studio albums with Bowie followed by four with Ian Hunter, and also worked as a sideman in touring bands with Van Morrison and Bob Dylan.

Slaughter on 10th Avenue is the debut album by English guitarist Mick Ronson, then-guitarist of David Bowie's backing band the Spiders from Mars. It was released in February 1974 by RCA Records. For inspiration, Ronson relied on Annette Peacock's 1972 album I'm the One; he used the title track and her arrangement of Elvis Presley's "Love Me Tender". Two songs were co-written by Ronson with Scott Richardson, who had been involved in the Ann Arbor music scene since the mid-'60s and came to prominence as lead singer of the SRC. Richardson was brought into the Bowie camp by Angie Bowie, who met him through Ron Asheton of the Stooges. During the recording of the album, Ronson considered putting together a new band with Richardson, Aynsley Dunbar, and Trevor Bolder, to be called the Fallen Angels, but plans fell through. 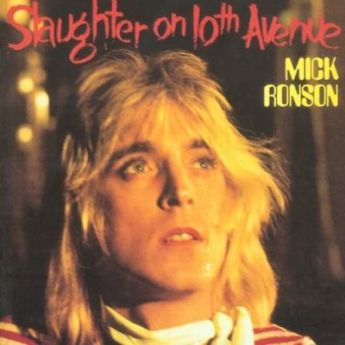 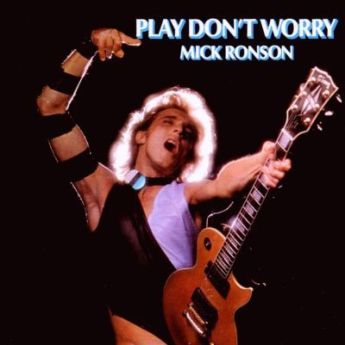 Play Don't Worry is the second album by English guitarist and singer Mick Ronson, recorded in 1974 and released in January 1975 after his several projects in the early seventies together with David Bowie, Lou Reed and the band the Spiders from Mars. It contains mainly covers arranged by Ronson for his own sound, covering everyone from Pure Prairie League, The Velvet Underground and Little Richard. The backing track to "White Light/White Heat" was salvaged from Bowie's Pin Ups sessions. The title track was co-written by Bob Sargeant, later producer to The Beat amongst others, who released an album First Starring Role in April 1974 which included Ronson on recorder and producing four tracks.