Steve Lukather aka "Luke" and Joseph Williams released individual solo albums on February 26, 2021 via The Players Club / Mascot Label Group. Both artists have made significant contributions to the other’s album.

Toto bandleader, studio guitarist, and all-around six-string ace Steve Lukather proves he still has all of his magic on his new solo album I Found The Sun Again. The record features a mix of original and cover songs impressively rendered by Lukather and a band of friends and luminaries that includes Ringo Starr, drummer Greg Bissonette, keyboardist Jeff Babko, and bassists Jorgen Carlsson and John Pierce. Toto band-mate David Paich performs piano and organ across the album, as well. Joseph Williams also sings on multiple tracks, wrote string and horn arrangements, and contributes some additional keys. Lukather co-produced the set with Ken Freeman, who also took care of the engineering and mixing chores. I Found The Sun Again is full of killer songs, outstanding musicianship, and the kind of organic hooks you’d expect from someone with Lukather’s pop/rock pedigree. 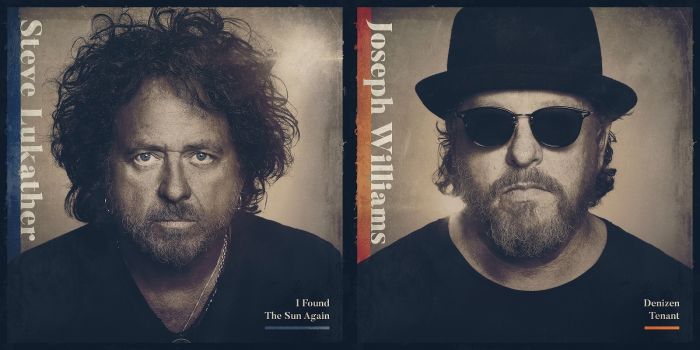 The musicians and singers on Joseph Williams' new record Denizen Tenant reads like a who’s who of players that have been in the artist’s life over the past four decades. Amongst these contributors are band-mates from Toto David Paich and Steve Lukather. Simon Phillips, Leland Sklar, Lenny Castro, Nathan East, all of whom enjoyed tenures in Toto are also featured players on the album. Denizen Tenant features a dozen new recordings. Amongst these are a cover of The Beatles "If I Fell," which Williams cites as the one specific song that taught him about the power of harmonies and vocal arrangements. On Peter Gabriel's "Don’t Give Up," a very special guest performance is featured in his daughter Hannah laying down a vocal track. Across the recorded repertoire, there is a consistent presence of performances by guitarists Steve Lukather and Mike Landau alongside percussionist Lenny Castro.