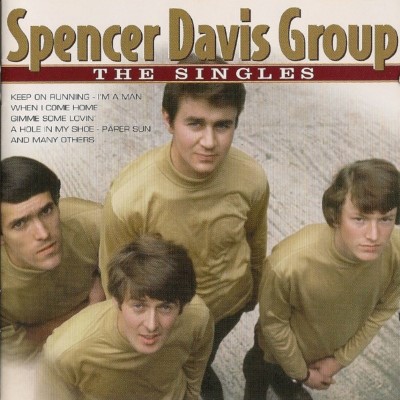 Spencer Davis, Welsh musician and founder of the Spencer Davis Group, died Monday while being treated for pneumonia in the hospital. He was 81.

The best collection of Spencer Davis tracks out there and you can find quite a few. No live recordings. No fillers. Just the original single versions of all of their hits plus, as a bonus, some dandy Traffic tracks for good measure. Spencer Davis broke out with teenage Steve Winwood on the hammond organ and snarling out mighty mature vocals for a kid. Keep On Running, Somebody Help Me, Gimme Some Lovin and I'm a Man - suddenly putting these guys at the top of the heap of British Invasion bands. Steve left the band to form Traffic and in came Eddie Hardin - who actually sounded a lot like Steve. However Eddie was not devoted to blues influenced rock so the styles varied: Time Seller, After Tea and Don't Want You No More. The With Their New Face On LP signaled a new more pop psych sound - great music but the hits ceased despite several solid LPs in the 1970s. The Singles covers the Winwood period solidly and tips the hat to the Hardin period. Then a pivot and we are off to Traffic - a band that embraced these pop psych influences, tossed in some jazz and arguably wrote one of the all time classics - Feeling Alright (thank you Dave Mason). Glory days for music. Steve went on to global success after success. Spencer Davis kept the brand going, made some interesting country influenced solo LPs and toured with the hits.