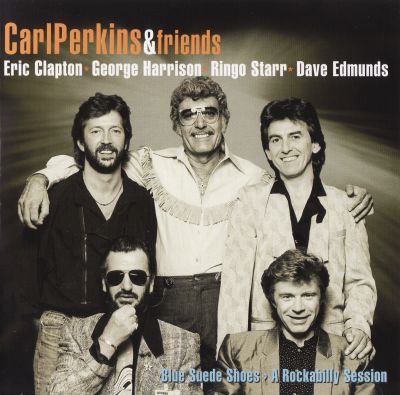 Blue Suede Shoes: A Rockabilly Session was a televised concert that was taped live at Limehouse Studios in London, England on 21 October 1985. The show featured rock n' roll pioneer Carl Perkins along with friends as guest stars, including Eric Clapton, former Beatles George Harrison and Ringo Starr, as well as Dave Edmunds who acted as musical director for the show. Most of the repertoire performed in the concert consisted of Perkins' classic rockabilly songs from the 1950s. It was directed by Tom Gutteridge. The concert special was originally broadcast in 1985 on Channel 4 in the UK and on Cinemax in 1986 with introductory comments by Johnny Cash, Roy Orbison, and Jerry Lee Lewis. The show was shown on Channel 4 on 1 January 1986. Perkins performed 16 songs, with two encores, in an extraordinary performance. Perkins and his friends ended the session by singing his most famous song, 30 years after its writing, which brought Perkins to tears. The concert is a memorable highlight of Carl Perkins' later career and has been highly praised by fans for the spirited performances delivered by Perkins and his famous guests. It was the first public performance by George Harrison in more than ten years.