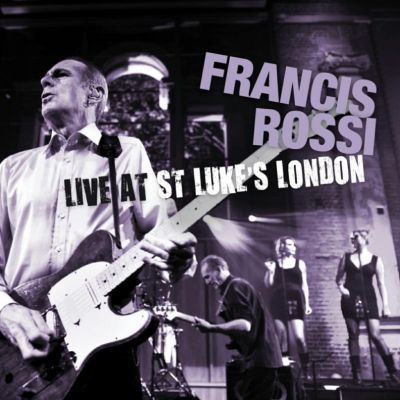 Famous for his trademark ponytail, Francis Rossi is the lead singer and guitarist with Status Quo, one of the most enduring and successful British rock groups of all time. Born in Forest Hill, London in 1949, Rossi began his musical career at age 13, getting together with some school friends to form a freakbeat band, the Scorpions, who went on to change their name to the Spectres and Traffic Jam until settling on Status Quo when the Highlights' guitarist, Rick Parfitt, joined them in 1967. Over a career spanning six decades, the band went on to sell 118 million records worldwide, release nearly 30 studio albums, and open the Wembley leg of Live Aid in 1985, the same year that Rossi recorded his first solo single, "Modern Romance," and an unreleased album entitled Flying Debris. In 1996, he eventually released a debut LP, the country-influenced King of the Doghouse, which was both a critical and commercial flop. After receiving an OBE for services to music in 2010, he released the belated follow-up, One Step at a Time, and embarked on his first ever solo tour; a year later his performance at St. Luke's Church in London was released as a live album.

2011 release, the first solo live release from the Status Quo leader. This live show includes not only Status Quo classics like 'Caroline', 'My Little Heartbreaker', and 'Don't Waste My Time' but also solo songs like 'Crazy for You', 'One Step at a Time' and 'Sleeping on the Job'. Showing his true talent, and being one of the best rockers of our time, he truly demonstrates not only his brilliant songwriting talents, but also his wonderful way with his music and performance skills. Features 18 of the 20 songs played at St. Luke's, clueing the listener in to every chord, beat and sound that took place that night.