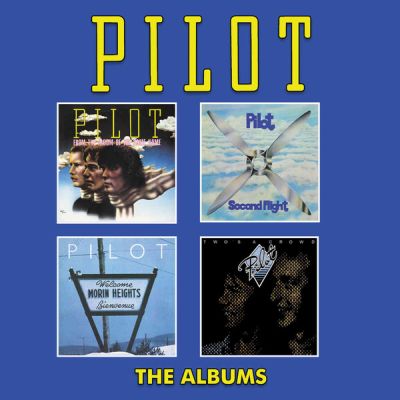 Scottish soft rock band Pilot was formed in 1973 by David Paton (bass and vocals), Billy Lyall (synthesizer, flute, and vocals), and Stuart Tosh (drums). They added a few members along the way, including two chaps who were former members of teeny boppers the Bay City Rollers, plus session guitarist Ian Bairnson, before issuing their self-titled debut in 1974. The album spawned a Top 20 hit with "Magic," but it was their 1975 single "January," off their sophomore effort Second Flight, that proved to be the biggest success of the group's entire career, rocketing to the number one spot. Further albums followed (1976's Morin Heights and 1977's Two's a Crowd), as did a few more moderate-sized hit singles ("Call Me Round," "Just a Smile") before Pilot folded. Tosh soon resurfaced as part of 10cc, as both Paton and Bairnson concentrated on studio work, playing on Kate Bush's 1978 debut, The Kick Inside, as well as on recordings for Alan Parsons, who had produced their first, second, and fourth albums. Lyall issued a solo album, Solo Casting (which featured his fellow Pilot bandmates), and later joined the group Dollar, before passing away in December of 1989 from an AIDS-related illness. Paton and Bairnson returned in 2002 with Blue Yonder. Twelve years later, they brought Tosh back into the fold for A Pilot Project: A Return to the Alan Parsons Project a set of covers recorded in tribute to Parsons' creative partner Eric Woolfson.

This set features all of the albums released by Pilot between 1974-77. Disc 1 is the debut From The Album Of The Same Name which features the hit single 'Magic' - a UK #11, it also hit #5 in the USA and #1 in Canada and has been featured in films such as Herbie: Fully Loaded, Happy Gilmore and Magic Roundabout. Three bonus cuts have been added including the ultra-rare 'Ra-Ta-Ta' single recorded under the name Scotch Mist. The second disc is the UK #48 hit album Second Flight. This features the international hit single 'January' - a UK #1, it also topped the charts in Australia, made #21 in Germany and the Top 100 in America. The song has also been regularly used in TV adverts for the Asda superstore! One of the bonus tracks is the UK #31 hit single 'Just A Smile'. Disc three is 1976's Morin Heights album which includes the singles 'Canada', 'Running Water' and 'Penny In My Pocket'. Amongst the bonus tracks are rare solo 45's from members Billy Lyall and David Paton. The final disc is 1977's Two's A Crowd album, previously only available on CD in Japan. Includes the singles 'Ten Feet Tall', 'Monday Tuesday' and 'Get Up And Go'. The booklet includes detailed liner notes by History Of Rock editor Michael Heatley (in a new interview with lead vocalist David Paton) plus picture sleeves from around the globe. 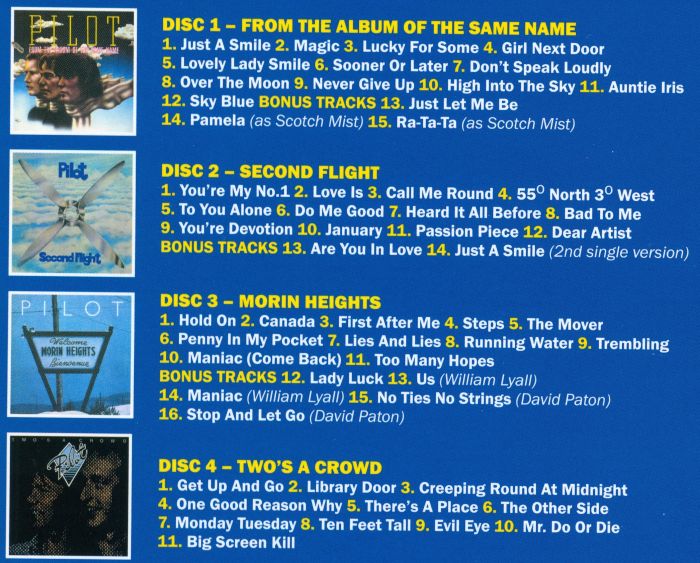