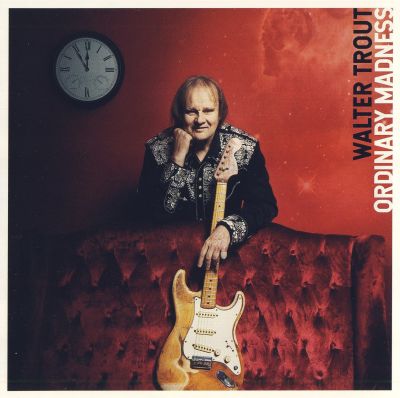 The life of a traveling blues musician isn't easy. The vocation is rife with loneliness, bad food, cheap hotels, and lack of sleep. Walter Trout is a survivor of that life (just barely). During the late 1960s and '70s, he worked the road with Big Mama Thorton, Joe Tex, and John Lee Hooker. In the 1980s, it was Canned Heat and John Mayall & the Bluesbreakers. He's led his own bands since 1990 and experienced cycles of triumph, tragedy, alcohol and narcotic addiction, and recovery from a near-fatal liver transplant that required two surgeries. Trout's dues are paid and then some. Ordinary Madness was produced by longtime collaborator Eric Corne and cut in analog at guitarist Robby Krieger's studio. Its many surprises reveal it to be unlike any other record in his large catalog. Its 11 songs detail with brutal honesty incidents of childhood and adult trauma, strles with mental, emotional, and physical health issues, personal shortcomings, and more, all without grousing. The title track is introduced with ambient electronics before emerging a slow, intense guitar blues, appended by organ, electric piano, and rhythm section. Trout's harrowing lyrics portray a mind observing itself in an act of self-destruction, frustrated by its lack of control: "It feels like a stalker, that's always around/It's an interior talker, that's trying to take you down." His slow, screaming solo ratchets the intensity. "Wanna Dance" is a scorching hard rocker examining life on the edge, soothed by music and the motion it dictates. "Heartland" is a love song that weds electric and acoustic guitars to an intricate roots rock melody. The uncharacteristically tender "My Foolish Pride" unflinchingly reflects on Trout's failures with hard-earned wisdom and equanimity as well as the influence the '70s singer/songwriter era: "Ain't it hard/when you've got no one but yourself to blame." "The Sun Is Going Down" is singular in Trout's recording career. It's a slow, droning, desert-tinged blues, drenched in Hendrix-ian psychedelia. Trout borrows from the Delta blues in the opening line, "Stones in my passway...," before addressing the inevitable encounter with mortality in his own words, "And time has no mercy, it just don't seem to care," then cuts loose with the first of two blistering solos in overdrive. In "Make It Right," he employs funky Chicago blues and soulful vocals in trying to make amends with his beloved before the clock runs out. There is real anger and frustration in his solo, while the band pushes hard for more. Set closer "OK Boomer" is a perfect manifesto for Trout as a guitar slinger nearing 70. He turns the generational insult on its head with raucous, loud, dirty hard rock blues that's indebted to records by early Deep Purple and Led Zeppelin. On Ordinary Madness, Trout takes unprecedented chances with his legacy. His musical and lyrical depth reveal an overflowing abundance of restless creativity. This album is perfect for American audiences to finally embrace Trout as a blues icon; Europeans did that decades ago. 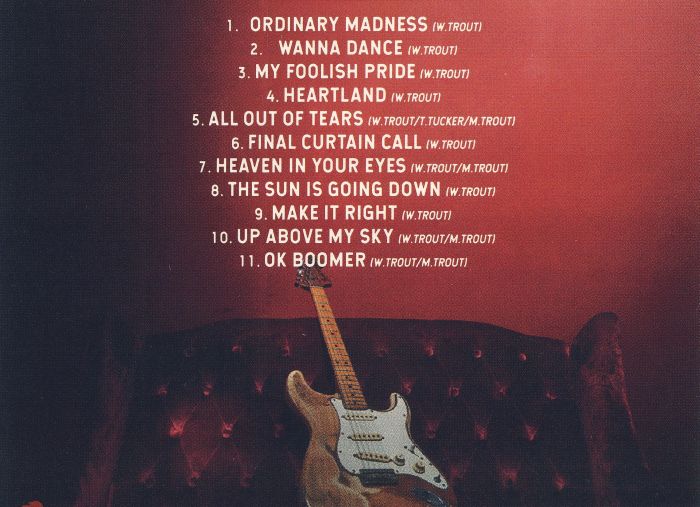