Go Cat Go! is a 1996 album by American rockabilly musician Carl Perkins. For most of the songs, Perkins performs with other artists. The album includes recordings from all four ex-Beatles, with Paul McCartney, George Harrison and Ringo Starr recording new material, while John Lennon's version of "Blue Suede Shoes" comes from his album Live Peace in Toronto 1969. Jimi Hendrix's version of the same song is also an archive recording. The album was produced by Bob Johnston. Also performing with Perkins on the album are Tom Petty & the Heartbreakers, Johnny Cash, Willie Nelson, Bono, Paul Simon and John Fogerty.

Go Cat Go! is a curious mixture. It isn't a solo Carl Perkins album so much as an all-star tribute album with some of the big-name guests recording with their hero. Both John Lennon and Jimi Hendrix appear via previous recordings, contributing their own versions of "Blue Suede Shoes." (Lennon's appeared on Live Peace in Toronto 1969, while Hendrix's was also recorded live.) Carl works in tandem with live guests Tom Petty, Johnny Cash, Bono, Ringo Starr, George Harrison, Paul McCartney, John Fogerty, and Paul Simon in right fine fashion. But the bottom line is that the real star of the show is Perkins himself, just playing and singing in a most masterful and rockin' way. If stars of this magnitude are tipping their hat, Carl shows on this waxing that their idolatry is well-placed. 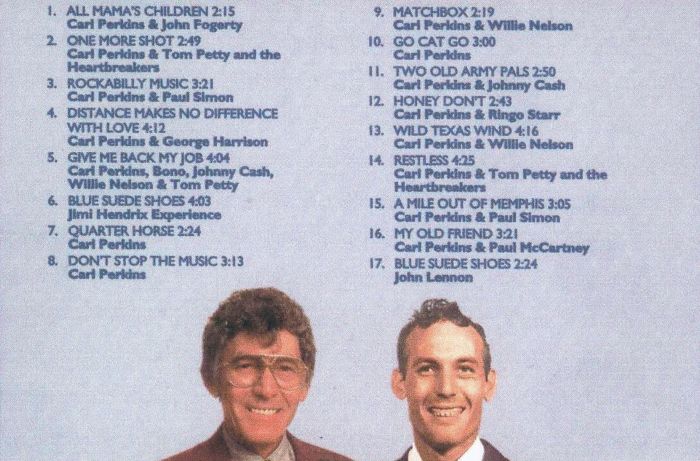