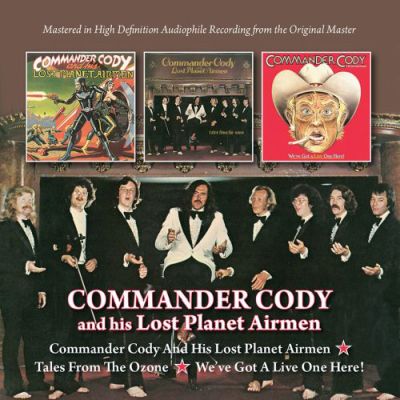 Commander Cody and His Lost Planet Airmen is an American country rock band founded in 1967. Core members included founder George Frayne IV (alias Commander Cody) on keyboards & vocals; Billy C. Farlow on vocals and harmonica; John Tichy on guitar and vocals; Bill Kirchen on lead guitar; Andy Stein on saxophone and fiddle; Paul "Buffalo" Bruce Barlow on bass guitar; Lance Dickerson on drums; Steve Davis and Bobby Black on steel guitar. The band's style mixed country, rock 'n' roll, Western swing, rockabilly, and jump blues together on a foundation of boogie-woogie piano. I'd admit that Idaho's George Frayne (Commander Cody) and his crew of permanently Lost Airmen produced Country music that is actually hard to define. You take straight up story-song pedal-steel Country as a base and every second song you throw in some 40s Swing, 50's R&B and Rockabilly - then layer that lot with some good old knees-up-mother-brown 60ts brass backing and you get an approximation of the ever so slightly anarchic musical stew that's on offer here. Great fun for sure when it works but a shade short of hammy awful when it doesn't. But all musical summations aside if you're a fan of Commander Cody then a state of seventh heaven awaits you here because the High Definition Audio Remaster on these 2016 British CDs is truly fabulous stuff (taken from first generation master tapes).

Digitally remastered two CD set containing Commander Cody's three Warner Bros albums from 1975 and 1976. Immensely popular live, this country rock-western swing-rockabilly band couldn't quite achieve great chart success. All three albums here did make the US Top 200, but Cody decided to disband the act in 1976,We've Got A Live One Here! was recorded in England during their tour in January and February 1976. 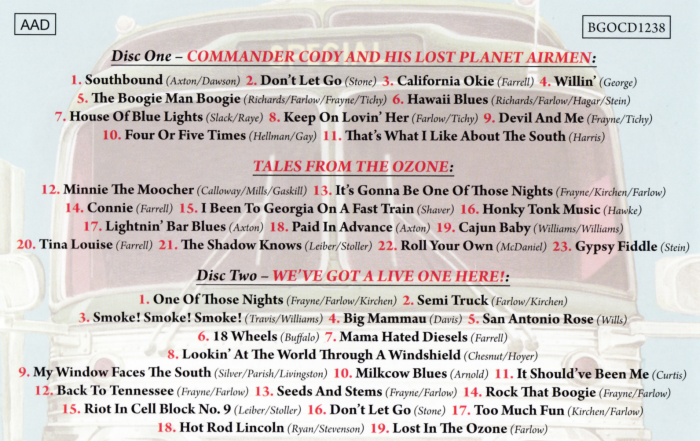